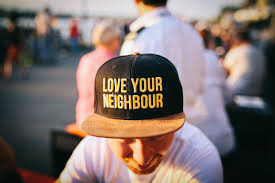 There are certain people who can't trust anyone. Everyone is suspect as being a potential for hurt and pain. The attitude is "get them before they get you." If you doubt this observation look at the popularity of guns in the United States. There are more guns in the United States than there are people, more guns than one for every person in the U.S. And it is statically more likely a person will die by a gun if they own a gun than if they don't.

Why the fear? Where does it come from? Fear is generated by the belief that one's fellow citizens are enemies not friends. We have created hell on earth for ourselves and this hell is a major symptom of our spiritual poverty as a nation. In our attempts to manage our fears of the other by arming ourselves we inadvertently wind up damaging ourselves up to an including over 30,000 deaths per year.

Supposing we asked ourselves how we really wanted to live our lives and worked together to create heaven on earth instead of the hell we have made? Jesus tells Peter to put his sword away and says, "Those who live by the sword will die by the sword." Matt 26:52. The spiritually mature get this and not only have put their guns away but reached out to the people who frighten them in a spirit of radical hospitality. They have decided to live lives of peace, joy, contentment, and healing instead of fear, anguish, stress, and war.

Email ThisBlogThis!Share to TwitterShare to FacebookShare to Pinterest
Labels: Love thy neighbor