Decison making - Whose will be done? 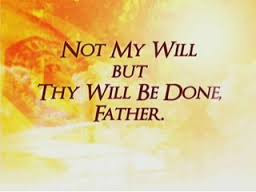 People perceive the world of reality as being outside of themselves and fail to realize that they make most of it up because of their biases, their prejudices, and their desires. Because of their implicit bias they make bad decisions. "Be careful what you wish for, you just might get it. Are you sure this is what you really want?"

Adam's sin was not that he ate the apple but that he believed God would throw him out of the garden. God didn't throw him out at all. Adam put himself out. Eating the apple was Adam's choice and Adam ate the apple anyway knowing full well that in this decision he was choosing to separate himself from God.

Why did Adam do it? Because Adam wanted to be his own person and do his own thing. Adam wanted to be as good as, if not better, than God, who, out of love, created him. And Adam and his children have been miserable ever since living in a hell of their own making.

People, today, after all these millenia, are still choosing to do their own thing, and refusing to believe that God loves them and didn't throw them out of the garden to punish them. God would never punish His own beloved creations. It is the creations who have brought their misery of separation on themselves and could be back in heaven in the next moment if they chose to be, but they are too afraid of giving up their separate existence so they choose life on the ego plane, full of drama and all the pain that entails, rather than unification with the Ground Of Existence.

It is our stubborn self righteousness that we forego our own happiness. As it says in the Course in Miracles, "Would you rather be right or be happy?"

Jesus taught us to pray, "Our Father, who are in heaven, hallowed be Thy name. Thy kingdom come, Thy will be done on earth as it is in heaven."

So out of our guilt and shame we put up a false facade, pretending things are one way when deep down we know better, and to justify our inauthenticity we just make stuff up and then the pretense is so thick we don't even know what's real any more, and we even forget that our lives are just fabrications, and aren't real, and we live in fear that the whole edifice we have created can implode at any time and the jig will be up and we will be left bare naked to be attacked by sneering, jeering, critics. But then we find that there is forgiveness and mercy and compassion and laughter about our misguided foolishness, and we are relieved to remember that our tiny, mad idea to separate ourselves from God never really happened. Our lives have been nothing more than a bad dream, and we have awakened to glory being home with our Creator. It is a miracle. And this story is told in our contemporary age by a text called A Course In Miracles. And the miracle occurs when we choose to remember God and eschew the drama of the ego. It is our choice. God waits patiently with His Love. Are you ready?
Posted by David G. Markham at 11:22 PM