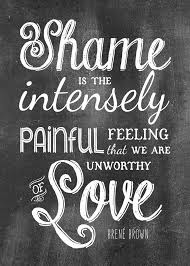 What is the basis of my fears that I am defective and inadequate in some way and it is only a matter of time before  people figure this out about me? At our roots we, unconsciously, experience shame, not of who are are, but of who we think we have become.

We have separated ourselves from the source of our being as we have developed our egos. We have separated ourselves to insure our physical survival and as we have developed we have realized that we not a body containing a soul, but a soul with a body which sometimes is not worth protecting and saving. The identification with the body is a road to hell. Not that our bodies are not important because they are the vehicles through which our soul awareness is realized, but undue attachment causes anxiety. As Bruce Cockburn sings in his great song, Last Night Of The World, "I learned not to trust in my body"

When bodies herd together to protect themselves from groups of other bodies we create hell on earth because at at spiritual level we are all one and to appeal to the herd for salvation is insanity.

Barry told me he believed in white supremacy and the problem in America is the "niggers". President Trump has told Americans that their problems are due to Mexicans and Muslims and if elected he will build a wall to keep Mexicans out and he will create bans and extreme vetting to keep Muslims out which will make America great again and keep Americans safe. Americans, out of their fears of "the other" elected him their leader.

Trump's  proposals promise to protect people's bodies while they destroy people's souls. It is written in A Course In Miracles, "For separation is the source of guilt, and to appeal to it for salvation is to believe you are alone. To be alone is to be guilty. For to experience yourself as alone is to deny the Oneness of the Father and His Son, and thus to attack reality." T-15.V.2:5-7

The At-one-ment is the cosmic consciousness that we are all in this thing called Life together. To project our shame on each other is the basis of sin and the cause of hell on earth.
Posted by David G. Markham at 12:15 PM

Email ThisBlogThis!Share to TwitterShare to FacebookShare to Pinterest
Labels: Shame