"Special relationships" is the mistaken belief that someone else can make you happy. 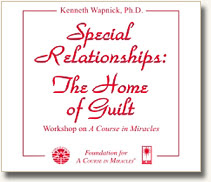 Do you think that loving another and being loved by another will make you happy? If so, you are sadly mistaken. The "give to get" dynamic underneath most relationships is the path to anger, resentment and shame. No other person can make you happy. If you believe this and act on this, you give your power away.

Ashley believed that she really loved Joshua and Joshua believed that he really loved Ashley but then Josh became concerned that Ashley might also like, if not love, Bradley. Josh asked Ashley about this, more like he accused her, and she denied it and the more Josh pressured with 20 questions the more angry and resentful Ashley got and started to believe that maybe Josh really didn't love her, he was only possessive and jealous.

Ashley finally broke up with Josh because she couldn't deal with his jealousy, possessiveness, and accusations which made her doubt herself and her lovability. Ashley's therapist said that Josh seemed insecure and Ashley certainly agreed but it did not make her feel more secure and loving in the relationship with Josh. Both Ashley and Josh broke up bitter, demoralized, and depressed each blaming the other for the failure of their relationship.

What went wrong? The mistake was the romantic belief that the job of the other was to make him/her happy. When the other person seemed to fail in that expectation, there was no further purpose of the relationship other than to learn an important life lesson: that no other person can make you happy. He/she can't make him/herself happy. How could (s)he possibly take on the responsibility to make another person happy?

Jesus tells us that we should love God first in Matthew 22:37-38

"Special relationships" are the path to hell unless we turn them over to our Higher Power. The disciples ask Jesus about people who have two or more spouses on earth which will be your partner in heaven and Jesus answers in Matthew 22:30 "For in the resurrection they neither marry nor are given in marriage, but are like angels in heaven."

For more click here.
Posted by David G. Markham at 8:12 AM