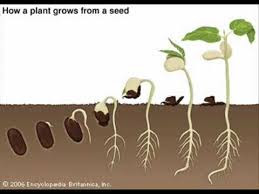 "Man is a seed, but just a seed – he is of great potential, but nothing is actual. The seed can die as a seed without ever becoming a tree, without ever coming to flowering. Man is a seed of light. But ordinarily man is not resplendent, man is not luminous, for the simple reason that the shell of the seed is hard and there are no windows. Man remains enclosed in himself; hence the darkness on the faces of people, in their eyes. But if the shell can be broken – and it can be – then great light is released. It is an explosion! That explosion brings ecstasy. That explosion brings you the eternal. That explosion makes you aware of your eternity,

There is no way other than meditation to break the seed. One has to go on hammering with meditation. One never knows how long it will take because each individual is different. No individual is predictable because people have lived different lives in their past and they have accumulated different personalities. A few people have very thin layers: just a little hit is enough, just the shadow of the whip is enough, not even the whip is needed. But a few people are really thick-skinned: unless you go on hammering, their inner light, their inner splendor, cannot be released. And one never knows how thick the layer is.

One thing is certain – it may take a little longer or a little less time, that doesn't matter – the shell of the seed can be broken, the breakthrough is possible. And that is the only hope for man because only through that breakthrough do you become aware that God is. Then life has meaning, significance, beauty, benediction."

Osho. First in the Morning: 365 Uplifting Moments to Start the Day Consciously, p.13
Posted by David G. Markham at 8:50 AM

Email ThisBlogThis!Share to TwitterShare to FacebookShare to Pinterest
Labels: Meditation