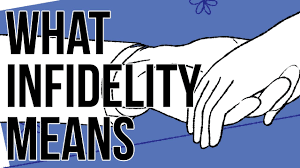 Fear is what makes hell on earth. It is the fear of scarcity, of attack, of loss of ego.

Love is what makes heaven on earth. Love for ourselves, for our fellow human beings, and for all of existence.

It takes a great deal of self knowledge and self awareness to rise above our fears and to connect with Love which is the undercurrent and ground of infinite existence.

George said to Angela, "It's okay. I love you."

Angela had had an affair just to make George angry so he would leave her.

George didn't get angry. George said to Angela, "I know I haven't been there for you the way I should have. Most of this situation is my fault."

Angela was flabbergasted. She didn't know what to say. She was so taken by surprise. "What do you want to do?"

"I want to be a better partner no matter what happens. You deserve better than the way I have been treating you."

George told his friends what had happened and they told him, "You crazy, man. Can't believe you are putting up with that ho."

George laughed and said, "There is more to the story."

George opened his heart instead of shutting it down. He was motivated by love not by fear.

Email ThisBlogThis!Share to TwitterShare to FacebookShare to Pinterest
Labels: Love or fear