The God of second chances 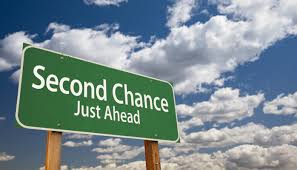 We all make mistakes. In many theological models, mistakes are called sins, but the word "sin" is laden with judgment, condemnation, guilt, punishment, shame, and fear.

Existentially, human beings, unconsciously, feel guilty for having separated themselves from God. We are told in religious texts that human beings have sinned and triggered the wrath of God who will punish them sometimes eternally in a hell. These myths are projections of the human mind which is making God in the ego's own mistaken image.

The Universalists tell us that their God loves us unconditionally and would never consign God's creations to hell. The Universalists prefer the word "mistake" to "sin." We are told that in the story of the adulterous woman, Jesus, tells the woman and go and don't make the same mistake again. Unfortunately, the Aramaic word gets translated in English as "sin" when the meaning of the Aramaic is actually "mistake." There is a big difference in the meaning of the word "sin" and "mistake" in English.

It is written in A Course Of Miracles "In every difficulty, all distress, and perplexity Christ calls to you and gently says, "My brother, choose again."

It is written in ACIM a little further on, "The images you make cannot prevail against what God Himself would have you be. Be never fearful of temptation, then, but see it as it is; another chance to choose again, and let Christ's strength prevail in every circumstance and every place you raise an image of yourself before. For what appears to hide the face of Christ is powerless before His majesty, and disappears before His holy sight."

The true God is a God of second chances, and third chances, and fourth chances, whatever number it takes until God's human creation gets it right.

The only question is "how quick will we learn?"
Posted by David G. Markham at 11:32 AM