Is it time to go home? 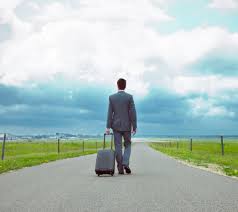 Be careful what you pray for. You may be barking up the wrong tree. You may be whistling in the dark.

God is not part of the path of the ego. God is understanding and compassionate and is sad to watch God's creations struggle and suffer on the path of the ego which they have created, but respecting their free will, God does not intervene because God knows nothing of this fantasy which God's creations have built. This is the meaning of the Adam and Eve's sin in the Garden of Eden. Adam and Eve went their own way and decided to create their own world apart from the world which God created. Adam and Eve and their children can't have it both ways: either want to live in God's world or the world of their own making.

We have chosen to live apart from God's world on the path of the ego and then expect God to intervene and make things easier for us in a world not of God's making. This expectation is not only silly and stupid, it is arrogant and full of a false sense of entitlement which springs from the childish willfulness and naivete of a two year old.

An observer might want to shout, "Grow up!" Playing your childish games, and when they go awry, asking God to fix the mess you have made is based on a huge misunderstanding of what has happened and what is going on. You have been on the wrong track. Has it dawned on you that there must be a better way?

Indeed there is a better way. It is turning off the path of the ego onto the path of the spirit. This turning initiates a searching for what one has left so long ago. It is a re-membering of the Oneness from which one has separated. This process of re-joining the Oneness is called the At-one-ment, Atonement.

Is it time to quit the nonsense and go back home?
Posted by David G. Markham at 8:39 AM