Has secular noise overwhelmed the silence of sanity? 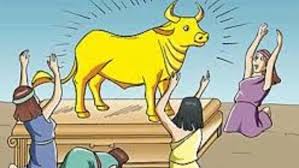 Robert Barron says, "The secular establishment always prefers Christians who are vacillating, unsure, divided, and altogether eager to privatize their religion. That's the kind of Christianity the regular culture likes:utterly privatized, hidden away, harmless." p.107, To Light A Fire On The Earth.

In our secular world, no distinction is made between truth and Truth. This distinction requires a level of wisdom and understanding that most modern people don't understand. This lack of understanding generates much anxiety and fear. It is written in A Course In Miracles, "You have every reason to feel afraid as you perceive yourself. This is why you cannot escape from fear until you realize that you did not and could not create yourself." T-3.IV.3:8-9

The spiritual path is not about intelligence, knowledge, creeds, belief systems, etc. Spirituality is not cognitive. In order to ascend on the spiritual path one must "lose one's mind." As St. Paul writes, we have to become "fools" for Christ. True spirituality is a return to child-like innocence wondering at the Oneness of existence.

People on the  path of the ego don't want to hear about the Truth. It scares them. It means they would have to detach from the things that they think will make them happy. This is too much. The young man asks Jesus how to get to the kingdom and Jesus tells him to sell all he has, give the money to the poor, and come follow me, and the young man walks away sad.

People on the path of the ego who worship all kinds of idols don't want to hear about the Truth, they just want the Truth tellers to go away, shut their mouths, and keep their understandings to themselves. Unfortunately, they has happened more and more as the secular noise overwhelms the silence of sanity.
Posted by David G. Markham at 11:07 AM