How does your media diet influence your spirituality? 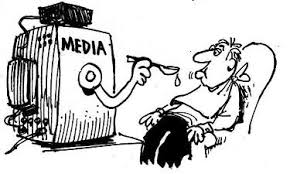 One of the things I learned early in my life was what media to consume. Some magazines, newspapers, TV shows, radio programs, movies, and now days social media can be uplifting and nurturing of our spiritual development and other social media not so much. Your media diet should be taken as significant as your food and beverage diet.

We live in the media age of irony and snark which often engages in calumny. In the realm of politics, our discourse has become not only uncivil but abusive, and intentionally so, as "negative" campaigning, it is believed, will lead to electoral victory.

The higher developed spiritually mature person will eschew such media products not because they are evil but because they are absurd and based on the drama of the ego. Just as one would not ingest tainted or spoiled food and beverages, the spiritually mature person would not consume tainted or spoiled media that promote values and beliefs that may be toxic to the human spirit.
Posted by David G. Markham at 10:46 AM

Email ThisBlogThis!Share to TwitterShare to FacebookShare to Pinterest
Labels: Media