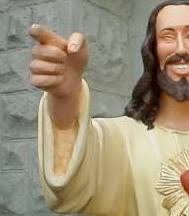 Because we have separated ourselves from the godhead, the ground of our being and think we are authorities unto ourselves. This thought is what A Course In Miracles calls "a tiny mad idea."

There is no problem with atheism. The question when someone says they are an atheist is "what kind of god don't you believe in?" Most people don't believe in most gods and so all mature, spiritually developed human beings are atheists of a sort. Being an atheist, though, does not mean that we don't recognize a transcendent energy in the universe called Life. How can any person deny Life of which they are a part?

And so there is a deep longing, a deep hunger to undo our separation and  join with the whole. It says in A Course In Miracles, "Into eternity, where all is one, there crept a tiny, mad idea, at which the Son of God remembered not to laugh." T-27.VIII.6:2 In other words, we humans have taken our separation seriously when the idea of our being separate from the ground of our being is absurd. The idea that we could take our existence on our own authority seriously is indeed funny if you get the joke. Unfortunately, many humans do not get the joke.

One of bosses used to say, "We take work seriously, but never ourselves."